Image Matters: Archive, Photography, and the African Diaspora in Europe 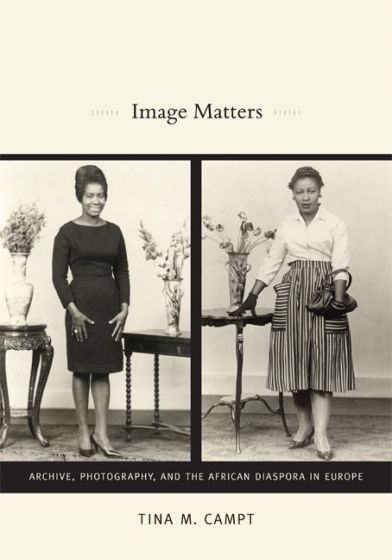 Campt explores the affective resonances of two archives of Black European photographs for those pictured, their families, and the community. Image Matters looks at photograph collections of four Black German families taken between 1900 and the end of World War II and a set of portraits of Afro-Caribbean migrants to Britain taken at a photographic studio in Birmingham between 1948 and 1960.

In Image Matters, Tina M. Campt traces the emergence of a black European subject by examining how specific black European communities used family photography to create forms of identification and community. At the heart of Campt's study are two photographic archives, one composed primarily of snapshots of black German families taken between 1900 and 1945, and the other assembled from studio portraits of West Indian migrants to Birmingham, England, taken between 1948 and 1960. Campt shows how these photographs conveyed profound aspirations to forms of national and cultural belonging. In the process, she engages a host of contemporary issues, including the recoverability of non-stereotypical life stories of black people, especially in Europe, and their impact on our understanding of difference within diaspora; the relevance and theoretical approachability of domestic, vernacular photography; and the relationship between affect and photography. Campt places special emphasis on the tactile and sonic registers of family photographs, and she uses them to read the complexity of "race" in visual signs and to highlight the inseparability of gender and sexuality from any analysis of race and class. Image Matters is an extraordinary reflection on what vernacular photography enabled black Europeans to say about themselves and their communities.
Contributor Bio(s)
© 2022 Wexner Center for the Arts. All Rights Reserved. All purchases support the Wexner Center for the Arts.