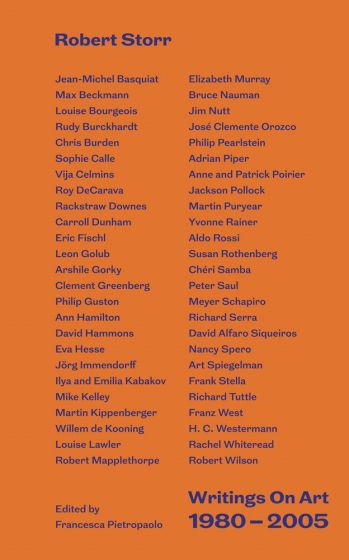 Following on from the much-lauded Robert Storr: Interviews on Art, Heni presents the first in a two-volume publication featuring the collected writings of Robert Storr, one of the world’s leading art critics and curators. Featuring the best of Storr’s criticism—reviews, articles and essays—from the 1980s to the mid-2000s, this publication includes texts on a wide range of artists such as Jean-Michel Baquiat, Louise Bourgeois, Carroll Dunham, Eva Hesse, Ilya Kabakov, Martin Puryear, Louise Lawler, Bruce Nauman, Adrian Piper, Jackson Pollock, Chéri Samba, Nancy Spero, Yvonne Rainer and Rachel Whiteread (among many others). Writings on Art offers fresh insights on some of the most influential artists of our era, and is a must-read for curators and students, artists, exhibition-goers and all those interested in the art and culture of today.

Robert Storr (born 1949) is a renowned American critic, curator and artist. His writing has appeared in countless books and exhibition catalogs. He was curator and senior curator in the Department of Painting and Sculpture at the Museum of Modern Art, New York, for more than a decade, and became the first North American curator of the Venice Biennale in 2007. Storr led the Yale University School of Art as Dean from 2006 to 2016, and continues to teach there as professor of painting.