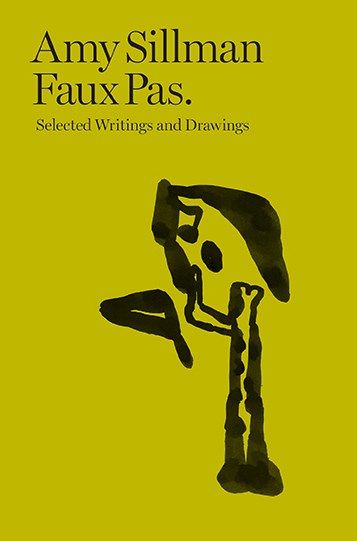 Essays on art-making, abstraction, humor, not-knowing, awkwardness and more, from one of New York’s most influential and popular painters and teachers

Since the 1970s, Amy Sillman—a beloved and key figure of the New York art scene—has developed a singular body of work that includes large-scale gestural paintings blending abstraction with representation, as well as zines and iPad animations.

Over the past decade, Sillman has also produced stimulating essays on the practice of art or the work of other artists: for example, reevaluating the work of the abstract expressionists with a queer eye; elaborating on the role of awkwardness and the body in the artistic process; and discussing in depth the role and meanings of color and shape. Featuring a foreword by Lynne Tillman, Faux Pas is the first book to gather a significant selection of Sillman’s essays, reviews and lectures, accompanied by drawings, most of them made specially for the book.

Faux Pas aims at revealing the coherence and originality of Sillman’s reflection, as she addresses the possibilities of art today, favoring excess over good taste, wrestling over dandyism, forms over symbols, with as much critical sense as humor. As Jason Farago notes in the New York Times, "Sillman is in a thin crowd (with, let’s say, Andrea Fraser, Hito Steyerl, Matias Faldbakken, David Salle) of artists who can really write. The evidence is in Faux Pas ... her writings display the same good humor and intelligence of her best paintings."

Based in New York City, Amy Sillman (born 1955) is an artist whose work consistently combines the visceral with the intellectual. She began to study painting in the 1970s at the School of Visual Arts and she received her MFA from Bard College in 1995. Her work has been exhibited internationally, including at the Whitney Biennial in 2014; her writing has appeared in Bookforum and Artforum, among other publications. She is currently represented by Gladstone Gallery, New York.