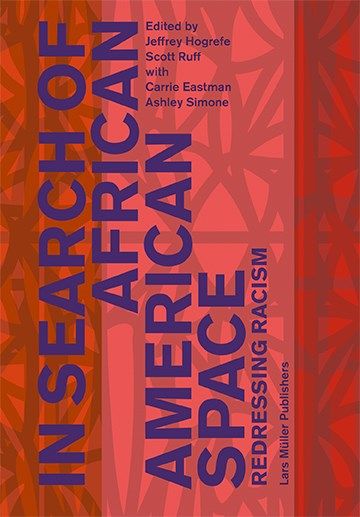 Drawing on architecture, performance art, history and visual theory, In Search of African American Space explores the creative relationship between the African diaspora and social space in America

Richly illustrated with vintage adverts, maps, posters and architectural plans, and organized thematically, this anthology, edited by Jeffrey Hogrefe and Scott Ruff at the Pratt Institute in New York, is divided into three sections. The anthology is organized thematically, presenting African American space in a broad cultural context. The section “The Monument, Memorial, and Mundane,” explores the analytical methods of architects Scott Ruff, Yolande Daniels, Rodney Leon, Elizabeth Kennedy, Sara Caples and Everardo Jefferson, who have dedicated their studies and practices to examining spatial typologies related to the African diaspora. As architects working directly in the afterlife of slavery, conscious of spatial performances of opposition in relationship to architecture, they introduce their own interpretations of African American space from their personal experiences and a dedication to an aspect of practice that has been operating largely outside of the academy.

The section “Politics without a Proper Locus” contextualizes the development of African American space in everyday practices that arose in the antebellum period and beyond, among enslaved persons on plantations and the growing population of freed Africans in urban settlements in the North and South. The section title derives from Saidiya Hartman’s influential engagement with French theorist of space Henri Lefebvre in the classic 1997 book Scenes of Subjection. The authors present the everyday practices of “vernacular citizenship,” as characterized by Pratt Institute scholar Ann Holder, that emerged among the enslaved, the formerly enslaved and their allies in the years before and after Emancipation to cast a light on responses to the inevitable African American experience of hypervigilance. The oppositional performances of African Americans are at the foundation of a search for African American space—a space that is continually erased by the state apparatus.

effrey Hogrefe is an author, critic, and founding coordinator of the Writing Program at the Pratt Institute School of Architecture. He is the creator of the Abolitionist Landscape Project, a cultural remapping of the Potomac River Valley. He received his B.A. from The University of California at Berkeley.

J. Yolande Daniels is a professor at USC School of Architecture;

Ann Holder is a professor at Pratt Institute.

Rodney Leon is the designer of the monument "The Ark of Return", and the memorial for the New York City African Burial Ground National Monument.

Marisa Williamson is a New York-based American artist who works around themes of history, race, and feminism. Best known for her body of work embodying Sally Hemings in various media and performance milieus.

Scott Ruff is currently a visiting associate professor of Architecture at Pratt Institute and Visiting Faculty at New York Institute of Technology.