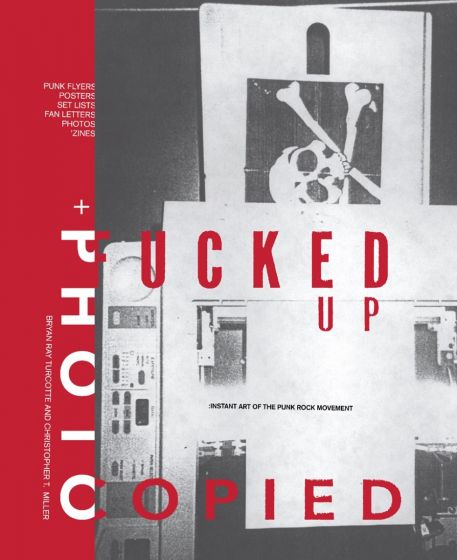 Raw, brazen and totally intense, Fucked Up + Photocopied is a collection of frenetic flyers produced for the American punk scene between 1977 and 1985. Many were created by the musicians themselves and demonstrate the emphasis within the punk scene on individuality and the manic urge of its members to create things new. Images were compiled out of whatever material could be found, often photocopied and, still warm, stapled to the nearest telephone pole to warn the world about next week’s gig.

One glance and you can sense the fury of live performances by bands such as Black Flag, the Dead Kennedys and The Minutemen, and, through the subtext the reader is exposed to the psyche of a generation of musicians stripped bare: The Germs, J.F.A, NOFX, X, The Circle Jerks, Devo, The Exploited, The Screamers, The Cramps, The Dils, The Avengers and more.

This San Francisco transplant to Los Angel­es spent his twenties on the road with his band while managing to hold down his job at the legendary punk record label Slash.

Turcotte started Kill Your Idols in 1999 and released winner of the 2000 Firecracker Award for a music book, Fucked Up + Pho­to­copied: Instant Art of the Punk Move­ment soon thereafter. He followed up with Post No Bills: Shepard Fairey, Metro and Punk Is Dead: Punk Is Everything along with Gingko Press. He co-owns Teenage Teardrops, Hope and Beta Petrol (an Indy Record Label specializing in vinyl only releases, a small art gallery in Echo Park and a music supervision and production company in that order).

He has exhibited all around the world with his own brand of chaotic punk designs mixed with vintage posters, photos, set lists and fanzines and has produced events and installations for iconic brands such as Converse, Levi's, Hysteric Glamour, Dita, Bounty Hunter and Ray Bans.