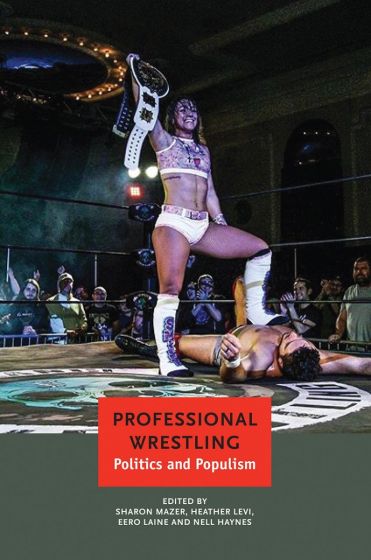 This edited volume asks how professional wrestling is implicated in the current resurgence of populist politics, whether right-wing and Trump–inflected, or leftist and socialist. How might it do more than reflect and, in so doing, reaffirm the status quo? While provoked by the disruptive performances of Trump as candidate and president, and mindful of his longstanding ties to the WWE, this timely volume looks more broadly and internationally at the infusion of professional wrestling’s worldview into the twinned discourses of politics and populism. The contributors are scholars from a wide range of disciplines: theater and performance studies; cultural, media, and communication studies; anthropology and sociology; and gender and sexuality studies. Together they argue that the game’s popularity and its populist tendencies open it to the left as well as to the right, to contestation as well as to conformity, making it an ideal site for working on feminist and activist projects and ideas.

Sharon Mazer is professor of theater and performance studies in Te Ara Poutama, the Faculty of Maori and Indigenous Development at Auckland University of Technology. She is author of Professional Wrestling: Sport and Spectacle and I Have Loved Me a Man.
Heather Levi is assistant professor of cultural anthropology at Temple University in Philadelphia. She is the author of The World of Lucha Libre. She has trained in lucha libre and several martial arts.
Nell Haynes is a faculty fellow in anthropology and Latin American studies at Colby College, in Maine. She is author of Social Media in Northern Chile and co-author of How the World Changed Social Media.
© 2022 Wexner Center for the Arts. All Rights Reserved. All purchases support the Wexner Center for the Arts.