Saturation - Race, Art, and the Circulation of Value [Critical Anthologies in Art and Culture] 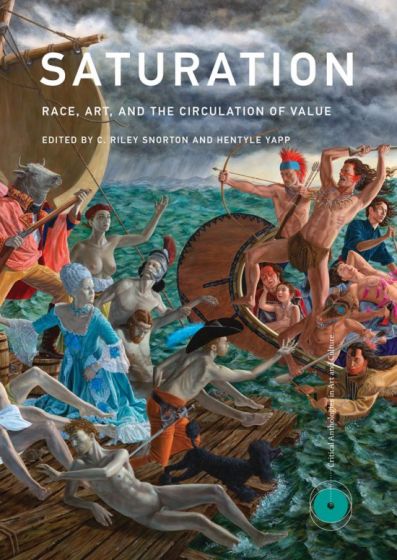 Race, Art, and the Circulation of Value

Essays, conversations, and artist portfolios confront questions at the intersection of race, institutional life, and representation.

Controversies involving race and the art world are often discussed in terms of diversity and representation—as if having the right representative from a group or a larger plurality of embodied difference would absolve art institutions from historic forms of exclusion. This book offers another approach, taking into account not only questions of racial representation but also issues of structural change and the redistribution of resources. In essays, conversations, discussions, and artist portfolios, contributors confront in new ways questions at the intersection of art, race, and representation.

The book uses saturation as an organizing concept, in part to suggest that current paradigms cannot encompass the complex realities of race. Saturation provides avenues to situate race as it relates to perception, science, aesthetics, the corporeal, and the sonic. In color theory, saturation is understood in terms of the degree to which a color differs from whiteness. In science, saturation points describe not only the moment in which race exceeds legibility, but also how diversity operates for institutions. Contributors consider how racialization, globalization, and the production and consumption of art converge in the art market, engaging such topics as racial capitalism, the aesthetics of colonialism, and disability cultures. They examine methods for theorizing race and representation, including “aboutness,” which interprets artworks by racialized subjects as being “about” race; modes of unruly, decolonized, and queer visual practices that resist disciplinary boundaries; and a model by which to think with and alongside blackness and indigeneity.

C. Riley Snorton is Professor of English and Gender and Sexuality Studies at the University of Chicago. He is the author of Black on Both Sides: A Racial History of Trans Identity and Nobody Is Supposed to Know: Black Sexuality on the Down Low.

Hentyle Yapp is Assistant Professor of Art and Public Policy at New York University, where he is also an Affiliated Faculty Member in the Departments of Performance Studies and Comparative Literature, as well as the Center for Disability Studies and the Asian/Pacific/American Institute.

Critical Anthologies in Art and Culture

This series revives the seminal series of critical anthologies on key cultural topics initiated in 1984 by the New Museum and the MIT Press, which produced six defining volumes for the field of contemporary art. The new series will build on this historic partnership to provide a platform for today's most pressing conversations around contemporary art and culture.