The Day the Rats Vetoed Congress 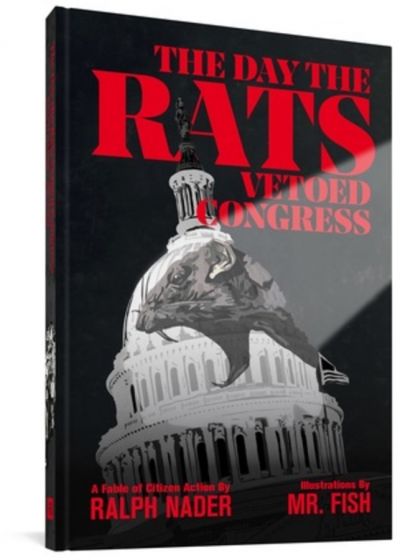 When a reporter breaks the news that "Rats have invaded the toilet bowls" of the halls of Congress, it sparks a national frenzy. Activists see the rats upending "business as usual," and turn the invasion into a symbol against the lobbyists who hold Congress in their sway. A massive citizen uprising follows, which threatens to sweep Congress clean of Wall Street’s chokehold of corruption — but the corporate titans have ways of fighting back! Gleefully and generously illustrated by famed political cartoonist Mr. Fish, and more than just a story, this is a "how to" guide to effect political change — from a pied piper who’s done it time and time again.

Ralph Nader's unrelenting public advocacy over the years has led to safer cars, medicines, and workplaces, healthier foods, and cleaner air and water. The Atlantic named him one of the 100 most influential figures in American history. Time magazine called him the "U.S.'s toughest customer." He lives (and does battle) in the nation's capital.
Dwayne Booth, more commonly known as Mr. Fish, is an American political cartoonist based in Philadelphia. His work has appeared in Harper's Magazine, The Nation, The Village Voice, Truthdig, The Atlantic, and the LA Times.
© 2022 Wexner Center for the Arts. All Rights Reserved. All purchases support the Wexner Center for the Arts.