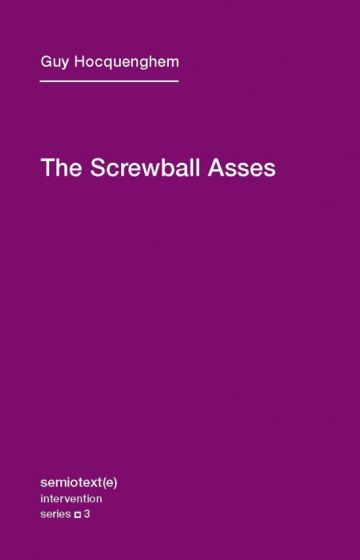 A founder of Queer theory contends that the ruling classes have invented homosexuality as a sexual ghetto, splitting and mutilating desire in the process.

First published anonymously in Félix Guattari's Recherches in the notorious 1973 issue on homosexuality (seized and destroyed by the French government), The Screwball Asses remains a dramatic treatise on erotic desire. In this classic underground text, queer theorist and post-'68 provocateur Guy Hocquenghem takes on the militant delusions of the gay liberation movement. Hocquenghem, founder and leader of the Front Homosexuel d'Action Revolutionnaire, vivisects not only the stifled mores of bourgeois capitalism but the phallocratic concessions of so-called homophiles, and, ultimately, the very act of speaking desire (and non-desire). Rejecting any “pure theory” of homosexuality that claims its “otherness” as a morphology of revolution, he contends that the ruling classes have invented homosexuality as a sexual ghetto, splitting and mutilating desire in the process. It is only when non-desire and the desire of desire are enacted simultaneously through speech and body that homosexuality can finally be sublimated under the true act of “making love.” There are thousands of sexes on earth, according to Hocquenghem, but only one sexual desire. Available in English for the first time, The Screwball Asses is a revelatory disquisition, earning Hocquenghem his rightful place among the minoritarian elite of Gilles Deleuze, Jean Genet, and Tony Duvert.