We Ate the Acid 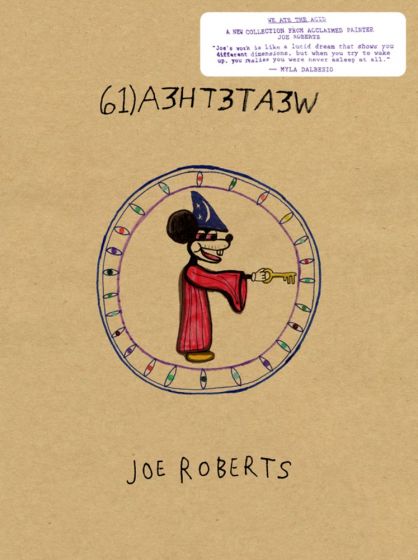 Artist Joe Roberts has spent more than a decade honing a deeply unique and unapologetically hallucinogenic style of art. Collecting over 100 new and recent paintings, drawings and mixed-media works along with an introduction by Hamilton Morris (Hamilton’s Pharmacopeia), We Ate the Acid is the latest product of Roberts’ visionary journeys and a testament to his expansive, singular imagination.

Joe Roberts has worked as an artist in San Francisco for the last decade. His mixed media work has been released in various formats over the years and shown nationwide to great acclaim. Joe creates artwork which represents a variety of mixed media formats and is reminiscent of work from Jean-Michel Basquiat and Joseph Cornell. Collage, paintings, diorama and figurines all play a role in the world he has created and is constantly reinterpreting. This book represents the most recent body of his work.

Joe Roberts is an artist and illustrator. Born in Madison, Wisconsin, he later studied at the San Francisco Art Institute. Known for his work with found objects, Roberts creates mixed media pieces, collages, and paintings that create an ever-changing surreal world. His much sought-after work has been shown in notable galleries including Slow Culture in Los Angeles and Marlborough Gallery in New York. We Ate the Acid is the second publication from Roberts. He currently lives and works in San Francisco.
Hamilton Morris is a psychonaut, scientist, journalist, and documentarian based in Brooklyn, Morris has traveled the world studying drugs and their influence on society. He is currently the host of the television series, Hamilton's Pharmacopeia.
Leo Fitzpatrick is an actor and gallerist. He is currently the director of the Marlborough Contemporary in New York City, and the former owner of the art gallery, Home Alone 2. He is a tireless advocate of contemporary art, and has curated countless shows with notable creators, including Rita Ackermann, Jack Pierson, and Christopher Wool.
© 2022 Wexner Center for the Arts. All Rights Reserved. All purchases support the Wexner Center for the Arts.