Robert Capa: Death in the Making 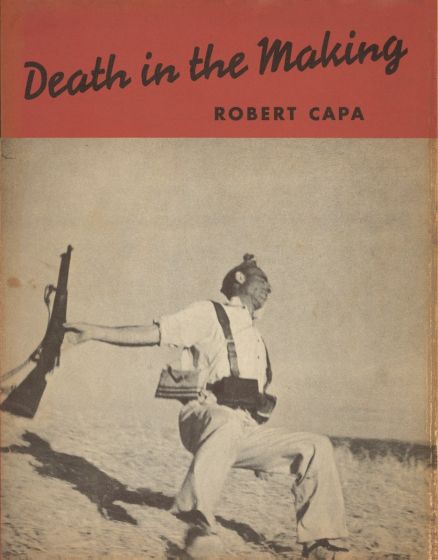 Robert Capa’s Death in the Making was published in 1938 as a poignant tribute to the men and women, civilians and soldiers alike, fighting in Spain against Franco’s fascist insurrection. The book included only one year of images from the Republican position, but covered the spectrum of emotions of a civil war, from the initial excitement to the more harrowing realities of modern warfare. But over time, after World War II and rising anti-communist paranoia in the United States, association with the Spanish Civil War was a liability and the book became obscured. Today, however, Death in the Making has reached cult status, not least because copies are hard to find (particularly ones with Capa’s famous Falling Soldier image on the dust jacket), but also for its passionate call to defend democracy.

With new scans of all the images, this remastered facsimile of the original edition reproduces the original layout by photographer André Kertész, the original caption text by Capa and preface by writer Jay Allen. The muddy 1938 publication is entirely transformed by high-quality printing to reflect the beauty and pathos of the original intention. This edition also includes a new essay with new research on the making and the reception of the original book, and a complete checklist identifying the author, location and date of each image. The most important new information is that Robert Capa and Gerda Taro are not the only photographers in the book, but also included was work by their good friend and colleague Chim, later known as David Seymour.

Robert Capa is one of the most well-known photojournalists of the twentieth century. Born Endre Ernö Friedmann (Budapest, Hungary, October 22, 1913–Thai-Binh, Indochina, May 25, 1954) to a Jewish family of tailors, he studied in Berlin, then fled to Paris in 1933. Quickly gaining an international reputation for his photographs of the Spanish Civil War, he later escaped to New York in 1939. He covered World War II as an Allied photographer, cofounded Magnum Photos in 1947 (with Chim, among others), and made several books based on his photographs of travel in Europe, the USSR, and Israel. He died after stepping on a landmine in 1954.