Feel the Music: The Psychedelic Worlds of Paul Major 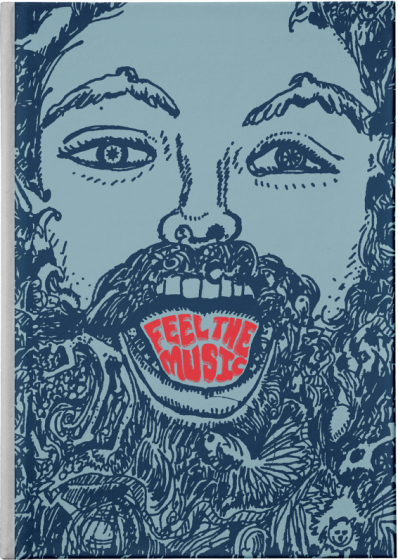 Paul Major has lived resolutely at the edge of outsider music culture for nearly a half-century. As an early private press and "real people" record collector turned eminent, underground rock 'n' roller, his influence is felt if not heard all around us—until now. Feel the Music traces Paul's trajectory from his formative days in the Midwest, his years in the late '70s New York punk scene, and into his curious career as a connoisseur and campaigner of the weirdest records of all time. Brought to life with unseen photographs, rare record covers, and cut n' paste ephemera from Paul's long running mail order catalog, while animated by Paul's storytelling, Feel the Music is a fanatical mystery tour through the further, outer reaches of music history. Alongside Paul’s writing, Feel the Music features essays by Johan Kugelberg, Jack Streitman, Michael P. Daley, Rich Haupt, Stefan Kery, Patrick Lundborg, Geoffrey Weiss, Jesper Eklow, and Glenn Terry. Each book also comes with a special Sorcerers and Endless Boogie split 7" vinyl record.

Paul Major was born in Louisville, Kentucky in 1954, placing him squarely in the generational path of rock 'n' roll's mighty wave: fuzz guitar first blew his mind at age 12, and he hasn't looked back since. After stints playing in bands in St. Louis and Los Angeles, he moved to New York in 1978 and spent the next few years embroiled in the city's explosive punk scene (most notably as part of the proto-speed metal band the Sorcerers). All the while, he found himself cultivating an extensive knowledge of rare and bizarre LPs. As his expertise in obscure collecting grew, Paul began a mail-order LP business, and his catalogs soon became must-reads for their mixture of hard-won crate-digging knowledge and witty, one-of-a-kind music writing—holy texts for psychedelic lifers the world over. Starting in 1997, Paul put his decades of experience to work as the singer and guitarist of the band Endless Boogie, whose skewed, no-frills take on rock has renewed his status as a preeminent voice on the farthest, weirdest margins of popular music.