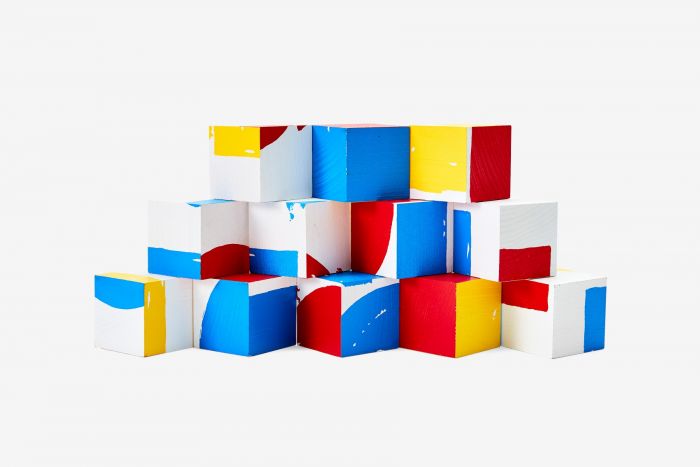 Twelve blocks that can be arranged to form a circle or a square in red, yellow and blue. Mix them up to create an endless amount of abstract compositions and playful sculptural forms.

Hervé Tullet is known for his love of playful simple shapes and ideas. He is the author of more than 75 acclaimed children books including Press Here, Mix It Up and The Scribble Book. Blocks is his first sculptural object. Recommended for ages 3 and up.

Hervé Tullet is a multi-disciplinary artist, performer, and renowned children’s book author with more than 75 internationally acclaimed titles. His iconic books include Mix It Up, Let’s Play, and Press Here (translated in over 30 languages), as well as his latest book, I Have an Idea, published by Chronicle Books in 2018. Tullet also runs large-scale interactive workshops involving up to 1000 people, both adults and children, in libraries, schools, art centers, and museums around the world. Tullet moved to New York City in October 2015.  Since then, he's hasn’t stopped experimenting. He’s appeared at events, performances, and readings at such prestigious venues as the Guggenheim and the MoMA.  He is also pursing exhibitions of his personal work; recently exhibiting hundreds of pieces at Invisible Dog Art Center and in Korea for his first retrospective.  His latest and most ambitious project is The Ideal Exhibition, a worldwide collaborative project based on his art and philosophy.