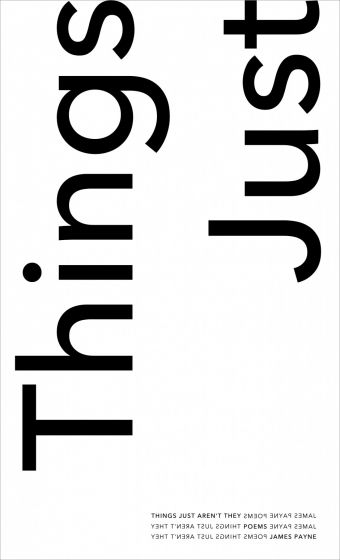 Things Just Aren't They, James Payne's first full-length poetry collection, is an incendiary and comic lament for the deformation of self under capitalism. Primarily situated in the Midwestern city of Columbus, Ohio, Payne's poems disentangle the processes of power permeating cultural spaces—office, gallery, university, and punk scene—in a voice moving between polemicist and romantic; satirist and true believer. Through exhaustive alluding and detailing, Payne re-historicizes, re-politicizes, and re-constructs our present moment, pulling it from the wake of an era characterized as post-historical and apolitical.

In Things Just Aren't They it is 2015, 1968, 1789, 1492, and You Are Here Now, bearing a palimpsest of years, riven inexplicably into consciousness, body, sex, race, class, city, society, country, history, identity, and asking, overtly or not—Why are we here? Payne's poems orbit that impossible question, shooting off like light in every direction in an attempt to elucidate, change the route, and reframe the narrative until it's within reach to erase.