$10.00
Add to Wish List
Email
Skip to the end of the images gallery 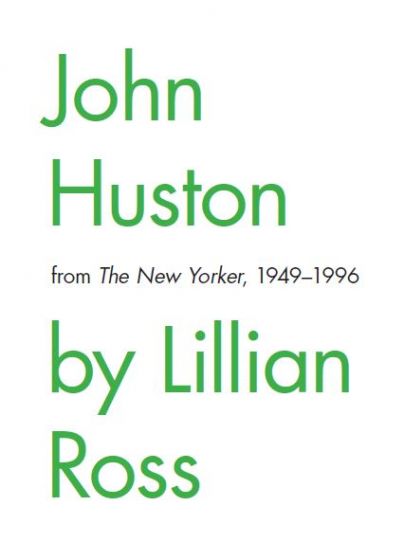 Lillian Ross joined the staff of The New Yorker in 1945, and wrote her first Hollywood reporting in 1948. The following year, Ms. Ross' "Talk of the Town" piece, Questions, a visit with John Huston in New York, the first in this collection, was published. Her writings on Huston continued in 1952 with the classic book Picture, the first work of factual reporting cast in the form of a novel, on the making the film The Red Badge of Courage.

Over the next four decades, Ms. Ross wrote about Huston from the set of The Bible in Rome in 1965 to the Brooklyn locations of Prizzi's Honor in 1984, with stops in-between across Manhattan while shooting The Kremlin Letter, at the premiere of Fat City, and in production meetings for Victory. Including a final "Talk of the Town" piece with Anjelica Huston on the set of Bastard Out of Carolina in 1996, this volume collects seven extraordinary pieces from The New Yorker by
Lillian Ross, published together for the first time.

Lillian Ross has been a staff writer at The New Yorker since 1945. She has written often about moviemakers—including Clint Eastwood, Federico Fellini, Akira Kurosawa, Oliver Stone, Tommy Lee Jones, Wes Anderson, and Francis Ford Coppola. John Huston was the main character in her classic book, Picture, about the making of the 1951 film The Red Badge of Courage. The book, still in print, is generally acknowledged to be the first time a long factual story was written—the interrelationship of Huston, the director, Gottfried Reinhardt, the producer, Dore Schary, the M-G-M production head and Louis B. Mayer, head of the studio as the main novelistic characters—in fictional form. Ross lives in Manhattan