A Mile and a Half of Lines: The Art of James Thurber 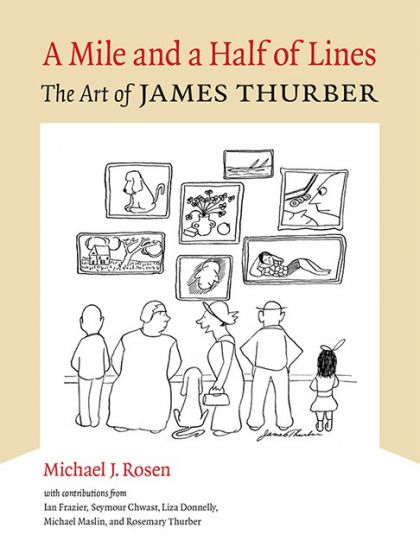 Humorist, cartoonist, writer, playwright. James Thurber was to the twentieth century what Mark Twain was to the nineteenth. At one point, his books were the most read of any American in the world. His work could be found anywhere—from the pages of the New Yorker to the pages of children’s books, from illustrated advertisements to tea towels and dresses. Now, in celebration of the 125th anniversary of Thurber’s birth, A Mile and a Half of Lines: The Art of James Thurber is a long overdue introduction and reintroduction to James Thurber and the artwork that fundamentally changed American cartoons.

Including some 260 drawings, this collection is the first comprehensive focus on his work as an artist, a cartoonist, and an illustrator. With commentary from a host of preeminent cartoonists and writers, including Ian Frazier, Seymour Chwast, and Michael Maslin, A Mile and a Half of Lines celebrates the significance of Thurber’s spontaneous, unstudied, and novel drawing style that not only altered the nature of American cartooning but also expanded the very possibilities of an illustrated line. Coinciding with the first major retrospective of Thurber’s art presented by the Columbus Museum of Art in 2019, A Mile and a Half of Lines showcases both classic Thurber as well as visual material never before seen in print.
Contributor Bio(s)
© 2022 Wexner Center for the Arts. All Rights Reserved. All purchases support the Wexner Center for the Arts.