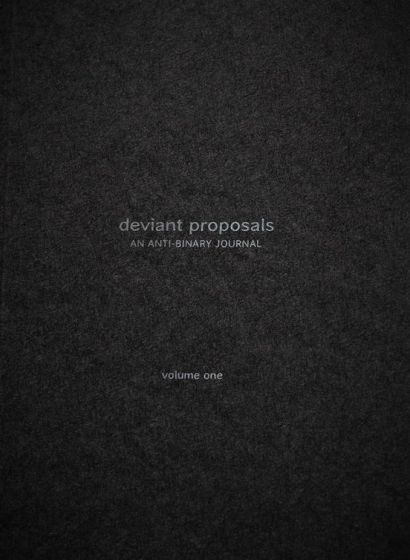 Matthew Anderson’s deviant proposals: AN ANTI-BINARY JOURNAL is a collection of works by queer artists from around the globe. The project was born out of Anderson’s struggle to feel fully connected to the queer community in Los Angeles. By turning to his international peers, this journal came into existence. The project began when Anderson compiled “ruminations and provocations by queer persons with a deep need to act / think / feel in opposition to strict binary systems according to (but not limited by) sexuality, gender, performance or identity.” The numerous contributing artists were given the freedom to submit work in any written format focusing on pondering the many questions that may have crossed their paths in relation to anti-binary modes of life, and its inherent provocation of the existing mainstream narratives and discourse. Anderson’s artist book creates a physical space where different voices of queerness converse, coexist and thrive.

ABOUT THE ARTIST:
Matthew Anderson is an artist and filmmaker currently living and working in Los Angeles. His work centers around multiplicity of perspectives and queer experience. He is the creator of ‘deviant proposals’ and writer and director of the feature film Baja Come Down. His film work also includes short, experimental and documentary projects which have shown internationally across Europe, Australia, North and South America. He is co-creator of Shadow Kitchen, a Los Angeles filmmaker collaborative, and co-creator of the LA Cinema Calendar. He holds a BFA from Chapman University.

AMBROSE DUPREE (THE ARTIST FORMERLY KNOWN AS AMBER DUPREE)
At this moment in time, Ambrose DuPree is a tiny but mighty Black queer and genderqueer individual who is from and currently works in Columbus, OH. They are also fortunate to consider (and want to thank) the many friends, family, art and community spaces they’ve encountered around the globe that they call home. They are a filmmaker by trade and an operations wizard by practice.

ERIN PIKE
Erin Pike is a queer performance artist and writer with a flair for the feminist, political, and absurd. She is a Simon Rockower Award winner.

HOLLY M. CRAWFORD
Holly M. Crawford is an artist, educator, and lycanthrope living and working in Los Angeles. Holly works predominantly in collage and uses found imagery and paper to explore play, magic, and identity. Holly has exhibited at leiminspace in Los Angeles, the Los Angeles Municipal Art Gallery, The Main Museum, The Nomadic Werewolf Museum, and the Maryland Institute College of Art.

JUDIT KIS
Judit Kis is a an emerging artist based in Budapest and Berlin. She received her MA Intermedia Art degree in 2015 at the Hungarian University of Fine Arts, where she also graduated from Fine Art Theory and Curating. She also attended Chelsea College of Art and Design and participated in short residencies and workshops internationally. In 2016 she had a solo show ‘I Have Never Happened’ at Topic in Geneva and her works have exhibited in art galleries and institutions in London, Berlin, Stuttgart, Aarhus and Tallinn. Her works explore the possibilities of integrating her continuously constructed identity into society and documenting the stretching of her boundaries when presented with existential problems or emotionally difficult situations. Her videos are illustrations of her writings, thoughts and personal improvement. Her practice is not only a self-healing process, but it also allows the audience to discover familiar patterns within their own life experiences concerning human relations and love affairs.

PETER KALISCH
Peter Kalisch is a visual/performance artist based in Los Angeles, CA. His work attempts to point light to the postmodern condition of disconnection from shared values, lived intimacy, human connection, and our physical bodies. His relationship to performance as a medium comes from the cathartic nature of reconnecting with his physical vulnerability after a lifetime of upbringing in a first-world capitalist environment. His work is an attempt at self-awareness and criticality, an encouragement to others to remove themselves from the pattern of self-victimization which is so apparent in our society. He promotes authenticity, vulnerability, honesty and freedom, with an often political and philosophical edge.

RACHEL ELIZABETH JONES
Rachel Elizabeth Jones is a writer and artist currently based in Vermont. As a writer, she has contributed to publications including Hyperallergic, The New Inquiry, and the Los Angeles Review of Books. As an artist, she works to create experience and exchange through objects, with an inclination towards practices of gleaning, physical and spiritual reclamation, and concepts of apocalypse. She is also a co-organizer with nomadic curatorial initiative Overnight Projects.

SAVIO DEBERNARDIS
Savio Debernardis is a multimedia artist and film director currently living and working in Berlin. His work in essay, video-art, performance and film, has been shown in institutions and festivals in Europe and North America. He holds degrees in Art History and Archeology from the University of Sorbonne Paris-IV, in Fine Art at the Ecole Nationale Supérieure des Arts de Paris-Cergy (ENSAPC) and continues in studies in film direction at the Konrad Wolf University of film in Babelsberg.