Twice Untitled and Other Pictures (looking back) 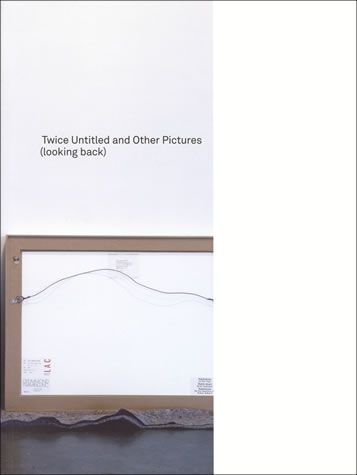 For the past two decades Louise Lawler has been taking photographs of art in situ, from small poignant black-and-white images of art in people’s homes to large format glossy color pictures of art in museums and in auction houses. In addition she has produced a variety of objects--paperweights, etched drinking glasses, matchbooks, gallery announcements--all of which cleverly describe how art comes to accrue value as it moves through various systems of exchange. Lawler’s oeuvre was essential in creating an expanded field for photography, it was crucial in postmodern debates over theories of representation, it remains indelible within the field of institutional critique, and it has always been trenchant and witty in its sustained commitment to a feminist vision of art, art history, and contemporary art practice.

But Lawler is also an old-fashioned "artist's artist," long overdue for the kind of serious reconsideration and recognition that this volume affords. The very self-effacing nature of Lawler’s practice, however, her continual suspicion about notions of authorship--and her sly disregard for museological conventions--have meant that she has resisted precisely the usual mid-career retrospective.

Twice Untitled and Other Pictures, published in conjunction with Lawler's first major museum exhibition in the United States, organized by the Wexner Center for the Arts, eats away at the standard museum practices of chronology, linear development, and the presentation of masterpieces, opting instead to explore such dynamic themes and undercurrents in Lawler's practice as her relationship to sculpture, her long history of collaborative projects, her production of such ephemera as napkins, matchbooks, and announcement cards, and the steady political dimension of her work–which culminated most recently in works that are deeply critical of the American invasion of Iraq.

With essays by art historian and political theorist Rosalyn Deutsche and curators Ann Goldstein and Helen Molesworth, Twice Untitled and Other Pictures promises to be an essential volume for anyone interested in late twentieth- and early twenty-first- century art.