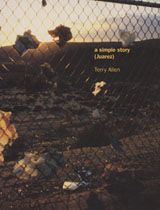 Terry Allen's creative output straddles and moves between his country-tinged music and visual and theatrical artworks that themselves often involve and encompass sculpture, video, painting, and music. A Simple Story (designed by Allen himself) touches on all the varied interests of this west Texas renaissance man. It presents the lyrics from Allen's Juarez, a song cycle recorded on a near-legendary 1975 album (rereleased in 1991 by Fate Records and in 2004 by Sugar Hill), accompanied by images documenting multimedia installations and videos Allen created in 1992 as visual counterpoints to the music.

The installations, developed while Allen was the first visual artist-in-residence at the Wexner Center, suggest stage sets for a theatrical version of Juarez, envisioning locales for several crucial moments in the song cycle's tale of two couples' innocents and outlaws restlessly traversing the American southwest and the border towns of Mexico.

These works, like Allen's music, not only convey that immediate narrative but knit it into a complicated, multilayered web of historical and contemporary desire, disaster, and escape. Allen (b. 1943) has exhibited throughout the United States and internationally and has work in such major collections as the Metropolitan Museum of Art, the Museum of Modern Art, and the Museum of Contemporary Art Los Angeles.