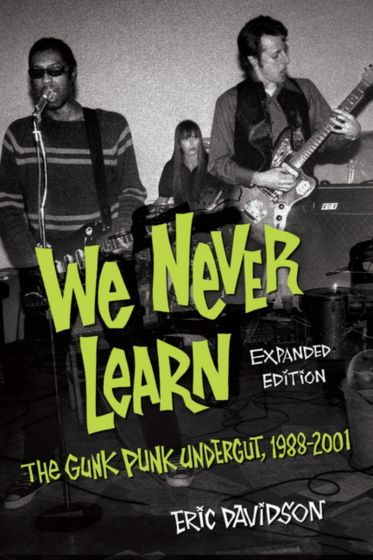 Truly, this is the last great wave of down-and-dirty rock 'n' roll.

Nirvana, the White Stripes, Hole, the Hives—all sprang from an underground music scene where similarly raw bands, enjoying various degrees of success and luck, played for throngs of fans in venues ranging from dive bars to massive festivals, but were mostly ignored by a music industry focused on mega-bands and shiny pop stars. We Never Learn: The Gunk Punk Undergut, 1988–2001 tracks the inspiration and beautiful destruction of this largely undocumented movement. What they took, they fought for, every night. They reveled in '50s rock 'n' roll, '60s garage rock, and '70s punk while creating their own wave of gut-busting riffs and rhythm.

The majority of bands that populate this book—the Gories, the Supersuckers, the Dwarves, the Mummies, Rocket from the Crypt, Jon Spencer Blues Explosion, he Muffs, and Davidson's own New Bomb Turks among them—gained little long-term reward from their nonstop touring and brain-slapping records. What they did have was free liquor, cheap drugs, chaotic romances, and a crazy good time, all the while building a dedicated fan base that extends across the world. Truly, this is the last great wave of down-and-dirty rock 'n' roll.

In this expanded edition, Eric Davidson reveals more about the punk undergut with a new preface, postscript, and even more photos.