$13.95
Add to Wish List
Email
Skip to the end of the images gallery 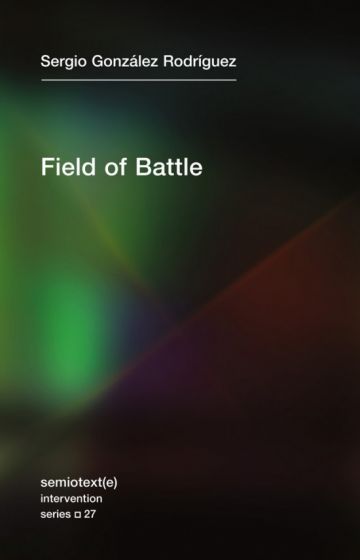 The emergence of a geopolitical war scenario, establishing a form of global governance that utilizes methods of surveillance and control.

In times of war the law is silent.—from Field of Battle

Field of Battle presents the world today as nothing less than a war in progress, with Mexico an illustrative microcosm of the developing geopolitical scenario: a battlefield in which violence, drug trafficking, and organized crime—as well as the alegal state that works alongside all of this in the guise of fighting against it—hold sway. The rule of law has been replaced by the dominance of alegality and the rise of the “a-state.”

This war scenario is establishing a form of global governance that utilizes methods of surveillance and control developed by the United States government and enforced through its global network of military bases and the multinational corporations that work in synergy with its espionage agencies. Geopolitics take advantage of social instability, drug cartels, state repression, and paramilitarism to establish the foundations of a world order.

Sergio González Rodríguez argues that this surveillance and control model has been imposed on the international community through extreme neoliberal ideology, free markets, the globalized economy, and the rise of the information society. The threats are clear. Nation-states are increasingly unable to respond to societal needs, and the individual has been displaced by money and technique—the axis of the transhumanist future foretold by today's electronic devices. The human being as the prosthesis of an artificial world and as an object of networks and systems: citizens are the victims of a perverse vision of reality, caught between the defense of their rights and their will to insurrection.