Sale Special Price $40.50
Add to Wish List
Email
Skip to the end of the images gallery 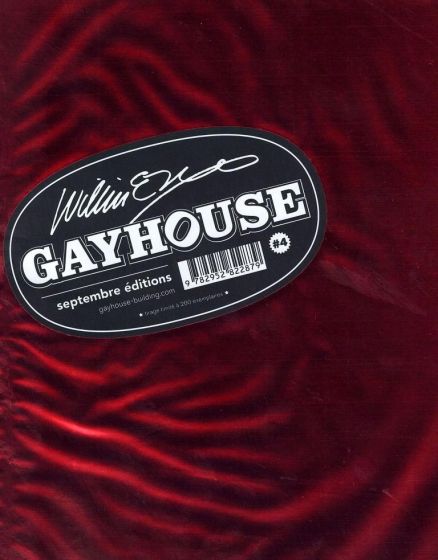 GAYHOUSE is a graphic and visual review that invites artists to share their personal, singular and affirmative vision of gay identity— whether this vision by joyful, poetic, worried, ironic, humorous, pornographic, modest… Taking over the review is similar to inhabiting a house. The invited artist is free to select a layout, its decoration, and the guests. Ultimately, the review will present an image of his or her world.

Invited to conceive the 4th issue of the journal, William E. Jones has gathered a collection of ancient photographs from the Library of Congress (Washington D.C.). By widening the scope of his investigation of the history of male homosexuality to encompass the history of masculinity in American society, his project is both a testimony on male friendship and the way in which it is depicted, and presents the esthetic history of masculinity as a style, attitude, sociality.

Born in 1962 in Canton, Ohio. The work of William E. Jones, an American artist, filmmaker and writer, parallels that of the historian and anthropologist, operating through the collecting and assembling of images. The cinematic and artistic work that he has developed over the past twenty years relates in large part to the understanding of the history of homosexuality through its images, of whichever nature they might be: promotional, detective, artistic, pornographic. After passing through his hands, films and photographs acquire the status of historical documents, and an analysis is produced through their assembly. Thus he reveals the evolution of customs and the invention of lifestyles. His work has been displayed on several occasions at the Whitney Museum (New York), at MOCA (Los Angeles), and at the Witte de Whit (Rotterdam).

GAYHOUSE is a graphic and visual review, published every 3 months, who invites artists and designers to expose their personal, singular and affirmative view of the gay identity – either it may be merry, poetical, worried, ironic, humorous, pornographic, discreet… Investing the review is like inhabiting a house. The guest chooses the layout, the decoration, and the acquaintances. It will be, in the end, the image of his world. Each issue includes 24 pages packed into a folder (like a lucky bag) that means inside each ‘Gayhouse’ there’s no censorship! Through its title, the review proclaims its attachment to gay identity: a homosexual identity that asserts itself without shame, while questioning its relevance. It seizes this name, from now on recognizable by the majority, to spread strong and unique affirmations linked to art and identity.