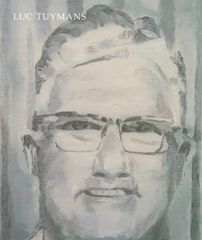 Edited by Madeleine Grynsztejn, Helen Molesworth. Text by Helen Molesworth, Joseph L. Koerner, Ralph Rugoff, Bill Horrigan Luc Tuymans is one of today's most widely admired painters, a continuation of the great tradition of Northern European painting and an enduring influence on younger and emerging artists. As a European child of the 1950s, his relationship to painting is inevitably structured by television, cinema and by the lingering effects of World War II; more recent historical preoccupations have included the dramatic turn of world events post-9/11.

Tuymans combines a muted palette with deteriorated surface effect and a singular use of cropping, close-up and sequencing--perfect devices with which to undertake his investigation of the pathological, the banal and the conspiratorial. Published in conjunction with the artist's first full-scale American survey, this is without question the authoritative publication on Tuymans. It features approximately 75 key works from 1978 to the present, and is accompanied by essays analyzing the painter's main concerns, with particular attention paid to his working process and his adaptation of source materials.

This book is not only the most comprehensive survey of Tuymans' career to date, but also the most thorough chronology of his artistic development. Born in Mortsel, Belgium, in 1958, Luc Tuymans first exhibited his paintings in 1985, at Palais des Thermes in Ostend. His first U.S. exhibition came ten years later, at The Renaissance Society in Chicago. He has also worked in film and printmaking.