Sale Special Price $44.10
Add to Wish List
Email
Skip to the end of the images gallery 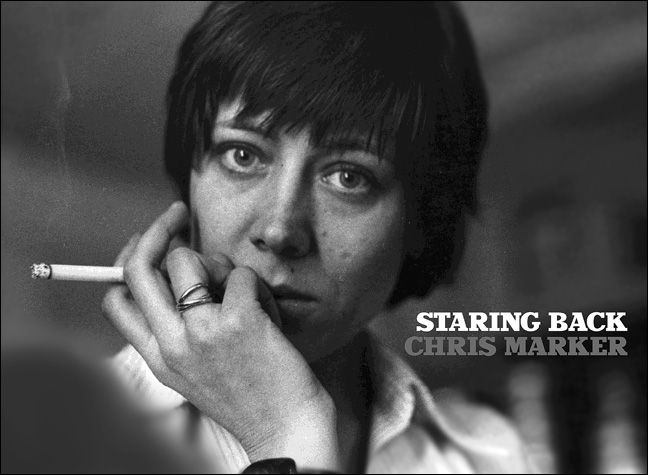 Limited edition of 500 with postcard set

Any new film and any new book by French filmmaker Chris Marker is an event. Marker gave film lovers one of their most memorable experiences with La Jetée (1962)—a time-travel montage set after a nuclear war that inspired Terry Gilliam's Twelve Monkeys (1995). His still camerawork is not as well known, but Marker has been taking photographs as long as he has been making films.

Staring Back presents 200 black-and-white photographs from Marker's personal archives, taken from 1952 to 2006. Some of the photographs are related to his classic films (which include Le Jetée, Sans Soleil, ¡Cuba Si!, and The Case of the Grinning Cat), others are portraits of famous faces (Simone Signoret, Akira Kurosawa), but most are pictures of people Marker has encountered as he has traveled the world (an extra who appeared in Kurosawa's Ran, a woman seen on a street in Siberia). The central section of the book contains a series of photographs documenting political protests Marker has witnessed, including the march on the Pentagon in 1967, the events of May 1968 in Paris, and the tumultuous 2006 demonstrations protesting the French government's proposed employment policies.

This limited edition of 500 comes packed with 15 shrinkwrapped postcards. The edition is available only at The Wexner Center Store. The catalogue features several unpublished texts by Marker, including the English language text of The Case of the Grinning Cat and Marker's annotations for some of the photos.

The book—which appears in conjunction with an exhibition at the Wexner Center for the Arts at The Ohio State University—also includes essays by Wexner Center curator Bill Horrigan and art historian Molly Nesbit.