Immemory: A CD-Rom By Chris Marker

Sale Special Price $17.96
Add to Wish List
Email
Skip to the end of the images gallery 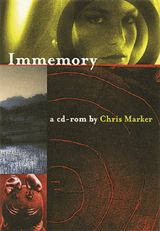 Filmmaker, photographer, writer, and traveler Chris Marker has never respected the boundaries between genres. His landmark 1962 film La Jetée is made up almost entirely of stills, its one moving image as thrilling as the Lumières films must have been for their original audiences. Since then, Marker's films (including the features Sans Soleil, A Grin without a Cat, The Last Bolshevik, and Level Five) have continued to stretch the definition of the art, merging at times with the essay, political manifesto, personal letter, even the computer game.

In Immemory, Chris Marker has used the format of the CD-Rom to create a multi-layered, multimedia memoir. The reader investigates "zones" of travel, war, cinema, and poetry, navigating through photographs, film clips, music, and text, as if physically exploring Marker's memory itself. The result is a veritable 21st-century Remembrance of Things Past, an exploration of the state of memory in our digital era. With it, Marker has both invented a literary form and perfected it

This 2008 revised edition features additional X-Plugs, and has been updated for OSX (see system requirements below).

"Chris Marker has a brilliant mind and heart and appetite for life, and it's a privilege to travel with him to whatever he chooses to remember and to evoke. He is one of cinema's all time greats - the most important reflective or non-narrative filmmaker after Dziga Vertov."—Susan Sontag

"How many CD-Roms have you come across that were marvels? …That were gates to another domain, that used the specific echoes and restraints of the format to lead you to unexpected places? See it through your eyes: Immemory is like being inside Marker's way of seeing, step by step, how he remembers. And in turn, he shows us how the CD-Rom …might become, anew, a new way of seeing."—The Wire

"Marker here creates nothing less than an imaginary museum positioned somewhere between cinema and literature, a road to the plastic arts."—Facets

"Chris Marker's extraordinary CD-Rom …is an immense album of faces, gestures, buildings, statues, and landscapes, a fragmentary recollection of the last century …The images are Marker's, but they are not his alone. In his notes he expresses the wish that his memories will be replaced by ours, but of course we don't really need to replace them: They are already ours."—ArtForum

For Macintosh computers only, running OS X version 10.4.11 or later, including 10.5 Leopard